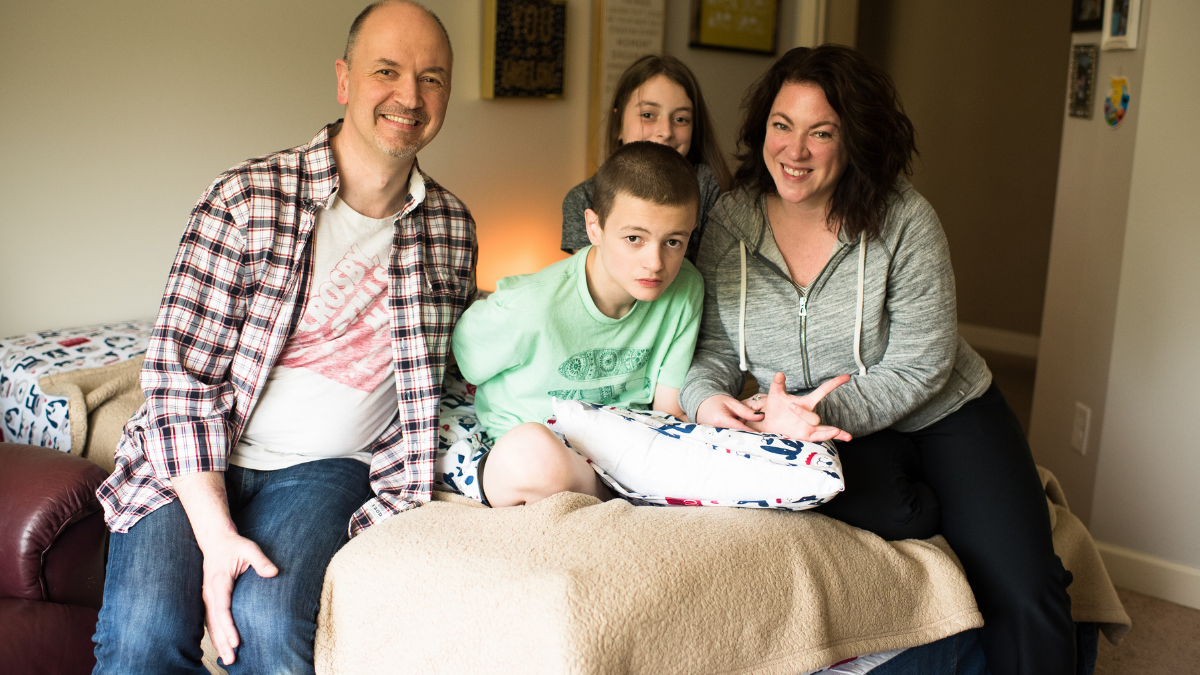 Julianâ€™s mother, Victoria, didnâ€™t think his condition could get any worse, until one day it did. Rather than inflicting harm on others, he turned to harming himself; a motherâ€™s worst nightmare. It started with hitting himself in the head and kneeing himself in the teeth. Then, in October 2016, Julian was hospitalized after nearly beating himself to death. He was admitted with two black eyes, a fractured skull, and hematomas on his head. The doctors â€“ as many others had done for the entirety of Julianâ€™s life â€“ attributed his actions to a behavioral issue and advised to treat accordingly, but his mother knew that wasnâ€™t the problem.

Julian was certified in the Minnesota Medical Cannabis Program in January 2017 for his seizures (at one point he was having 30-40 per day, many of which were grand mal), but has several other conditions that benefit from his new form of treatment as well. His mother has said, â€œI really think that if we didnâ€™t get qualified for this that he would really find a way to kill himself. Heâ€™s in that much pain.â€

Although born without any preexisting conditions, he was later diagnosed on the autism spectrum. Julian developed gastrointestinal issues as a young boy and suffers from neuropathic pain from a back injury that never healed properly. Julian endures Tourette syndrome-like motor tics and often struggles to control his own body.

With Julianâ€™s limited verbal skills (which he has worked extremely hard for), identifying the direct source of the pain was tricky, but Victoria knew an overwhelming amount stemmed from the region of his head. She could see when a headache came on and his pain levels increased â€“ he winced and looked as though he wanted to crawl out of his own skin, often grabbing at his head, hitting himself, or banging his head into whatever surface was closest. Sometimes, he would lash out at others. It had become clear that Julian did not want to hurt himself or those around him, but he did not have the control of his body to deal with the pain he lives in every day.

After Julian was released from his October 2016 hospital stay, he was put on several different medications and he had a stable month in terms of his aggression and self-harming. The side effects of his medications, though, caused him to sleep all the time and he seemed as though he no longer wanted to live; he was miserable.

In January 2017, Julian was hospitalized once again for the same reasons, and missed out on over a month of school. Once again, the doctors attributed it to behavior. Determined to find relief for her son this time around, Victoria searched for a physician who would certify Julian in the medical cannabis program. On the same day that he was certified, she made an appointment and met with a pharmacist at a LeafLine Labs patient care center.

After his first two doses of Cobalt, Julianâ€™s parents noticed him begin to relax. His seizure activity was low and the severity drastically decreased. He barely hit himself. Within a few days and several more doses of medicine, they continued to see small, yet promising improvements. After a month, they started to see more significant, lasting results. His speech improved and he has started to retrieve words his parents had not heard him speak in months. His need for swaddling decreased and he started to gain more control of his limbs. Julian started to sleep through the night more often. He was successfully weaned off his psych medications, and his mother hopes to be able to wean him off several others, including his seizure medications.

Early in February 2017, he returned to school. â€œOne day I was like, Heâ€™s really irritable, he doesnâ€™t feel good. So, I give him a little Tangerine and heâ€™s smiling before he leaves for school,â€ Victoria remembered, â€œI checked in and they said that he was having a decent day. We werenâ€™t having any decent days. I think itâ€™s really going to change his life.â€

The most extraordinary part is that Julian started to smile again for the first time in over half a year. â€œI know itâ€™s early onâ€¦ but this is the first time in a year that Iâ€™m seeing him smiling again. Heâ€™s reaching out and heâ€™s looking for help, heâ€™s trying to problem solve. Heâ€™s trying to keep himself under his weighted blanket or doing whatever he can to keep from hurting himself rather than going and doing it. He didnâ€™t start asking for help until he started the cannabis therapy,â€ Victoria remarked, â€œThis is not a band aid medication. This is a healing medication. This is not something that is going to have damaging side effects on his liver. Itâ€™s not going to cause organ damage and breakdown of his organs. Itâ€™s not going to have all these neuro-psychiatric side effects like the psych medicines do. I donâ€™t want him on any of that. Itâ€™s not addictive like an opiate. But itâ€™s going to manage his inflammation, his pain. And itâ€™s helping his brain to make connections again. Itâ€™s so huge to me.â€

When we spoke with Victoria in March of 2017, she told us that Julianâ€™s days consisted of going to school and spending time at home. He required two adults with him to protect him from himself, he wore two helmets and padded braces around his elbows to prevent his arms from bending, and he slept under a weighted blanket each night. â€œIf he canâ€™t bend his arms, he canâ€™t reach up to hit himself in the head,â€ Victoria said.

As of May 2017, Julian was going every day without wearing his protective gear â€“ helmets and arm guards â€“ or harming himself. He did not need to sleep with a weighted blanket anymore or have two people to hold his arms back throughout the day. He could spend time around his sister, family members, and friends once again. He attended school five days per week. He would flash his million-dollar smile many times each day and laughter was becoming more and more common. He continued to relearn phrases and words he hadnâ€™t spoken in years. His mother and father could tell that Julian was not in the pain that he used to be â€“ they could see it in his eyes, they could tell by the way he moved about their home.

Fast forward to May 2018 and all of the aforementioned still holds true. As his pain levels decrease, his mood and behavior increase. Julian is continuing to learn and grow – heâ€™s thriving. He is talking more and typing to communicate. Through his typing, Julianâ€™s family and loved ones are getting to know him and are seeing more of the bright, funny boy he is. He had an incredible school year and is looking forward to the summer when he can spend time with his family, swim, climb, and run around barefoot.

Medical cannabis has provided hope for Julian and his family that they had once lost sight of. Julian has faced many obstacles along his health care journey, but he is resilient and it is clear there is so much life inside of him. He is curious and enjoys going to school, looking at photos, and watching the History Channel and Wheel of Fortune. When he smiles, he speaks with his eyes and you can feel his joy. Victoria swears that without cannabis, her son would not be here with us today. She describes it as nothing short of a miracle.